What is a Brand?

A brand is an expression of a community's identity, its reputation and what it has to offer to its citizens, businesses and visitors. Marketing is the process of identifying the groups that could benefit from what the community offers, then communicating with and engaging with them.

The project grew out of a shared belief in the common interests between the city, the business community and the university:

A quote from newgeography, an urban-issues website, illustrates the project's purpose: "Cities without articulated identities will remain invisible, lamenting at every historical turn the loss of yet another opportunity to be like their more successful neighbors."

A Community Brand for Moscow

In January of 2013, a fantastic partnership opportunity was realized in Moscow. Three important people came together from the University of Idaho, the Chamber of Commerce and the Best Western plus University Inn to coordinate successful recruitment of the 2014 GOP Convention. Lee Rozen, Editor of the Moscow Pullman Daily News was spot on in a 2013 editorial when he called out the success of that effort saying more of those collaborative efforts were what Moscow needed. We're excited that we've moved farther down that path and have seen tremendous results along the way.

For this project, representatives from the University, the Chamber, the City and the community have pulled together in a collaborative effort known as Community University Strategic Partnership, or CUSP. We've taken on this branding project, as well as many others with terrific enthusiasm and success. Projects such as: 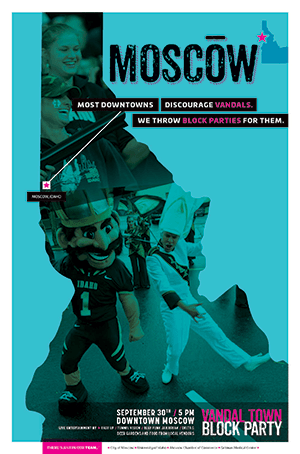 In May 2014, our Community-University Strategic Partnership (CUSP) Team began working with BHW1 Marketing to develop a community brand that captures the essence of the Moscow community. Our goal for the project was to define Moscow's brand, an expression of our identity, reputation and what we have to offer to its citizens, businesses and visitors. Thank you for all of your efforts in supporting this project. This team approach has proven itself right here in Moscow as we are moving forward together, with all of us pulling in the same direction to achieve goals that alone, we may never have made a reality.

The first look and feel package of the brand was rolled out on September 6 and 7 to the Chamber of Commerce membership, community and University of Idaho Leadership luncheon.  I'm excited to see this brand approach in action and thank our partners, the University of Idaho, the Moscow Chamber of Commerce and most importantly the entire community of Moscow!