The Third Street Gallery is a space for art in the heart of downtown Moscow. City of Moscow Arts Staff and members of the Moscow Arts Commission have worked together to create artistic direction for the Third Street Gallery since the gallery’s opening in September 1997. The gallery features artworks in a wide range of media, subject matter, and content while presenting a curatorial vision open to all cultures and art forms. The Third Street Gallery exhibits the work of established and emerging makers from the Palouse and the broader Inland Northwest, celebrating the creative excellence of the region in a well-loved public space.

The Third Street Gallery features artwork on the second and third floors inside Moscow City Hall. The building was designed by architect James Knox Taylor in 1911, and was formerly the Moscow Federal Building. Entered in the National Register of Historic Places in 1973 as a Second Renaissance Revival brick building, the structure now houses City offices and meeting spaces such as the City Council Chambers. The Third Street Gallery is an essential part of this building, as it brings art into the center of civic life in the City of Moscow. 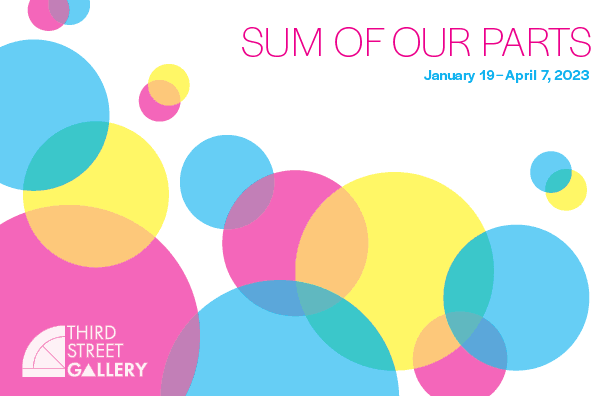 One of these things is NOT like the other! But can things that don’t quite match inhabit the same space? In Sum of Our Parts at the Third Street Gallery, 22 visual and literary artists of the Palouse region exhibit artworks that illustrate unity of disparate parts by creating unexpected combinations of imagery, objects, or text.

Artists were invited to create artworks with parts that exist together harmoniously, jarringly, humorously, or with the sweet surprise of fresh connections.

Obsession, in its most transcendent form, represents devotion to an object of attention. It’s a fixation, a firm anchor that facilitates exploration. Artists often use an obsessive return to the familiar in order to study the self as a variable. For Obsession at the Third Street Gallery, artists are invited to submit works made with repetitive marks, methods, materials, and a reverent preoccupation with ritual.

This exhibition will be juried by artist and Washington State University assistant professor David Janssen Jr.

Submissions accepted online until 5 p.m. on March 9, 2023 at: moscowarts.submittable.com/submit