In Memory of Officer Newbill

Lee loved music, especially Celtic music, and while he could not sing, he was self-taught with the fiddle and dulcimer. However, as he practiced the fiddle he was often asked to take his efforts to another room. Lee was a great storyteller. He had a gift for turning everyday happenings into entertaining stories to share with family and friends.

Lee died doing what he loved, serving people. Lee’s last words were to tell his partner to take cover as they came under fire that last night.

It is not how he died that makes Lee a hero, it’s how he lived his life.

Lee’s father was a marine aviator and Lee gained much of his love for history by living all over the United States and in the Panama Canal Zone.

Lee graduated from high school in Cherry Point, North Carolina. Afterwards he attended college in northern Virginia until transferring to the University of Idaho, where he graduated in 1982.

Lee married Rebecca Fouts December 22, 1981 in Twin Falls, Idaho, hometown of Lois and the late Marvin Fouts. He was proudly sworn in as a commissioned Army officer in May 1982 and served in the Army for ten years.

He is survived by his wife, Rebecca Fouts Newbill; his three children Christina Newbill, Lisa Rippee and husband Scott Rippee, and Jeremiah Newbill and wife Samantha Banner Newbill. He is also survived by his three grandchildren, Caiden and Danny Rippee and Aiden Sullivan.

Lee was the fourth of five children and is survived by his parents, Merrill (Bud) and Mary Newbill; and his siblings Dixie Reyes, Judy Burns, Katy Newbill and Edward Newbill. He will be sorely missed by his family, which includes numerous aunts, uncles, cousins, nieces and nephews and in-laws. Lee was cremated and his ashes scattered over his beloved Idaho woods.

Please help by celebrating his life with your happy memories of him.

In Honor of Lee Stewart Newbill
Moscow Police Department
May 19, 2007

Wife: Rebecca Jo “Becky ”(Fouts) Newbill, married in 1981 in Twin Falls, Idaho. Lee and Becky met in the ROTC program while they both attended the University of Idaho.

College: Graduated from the University of Idaho on May 15, 1982, with a Bachelor of Science Degree in General Studies. Also attended Northern Virginia Community College in Fairfax, VA.

Military: United States Army, May 1982 to July 1992. Received an honorable discharge at the rank of Captain. 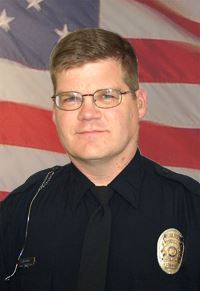